Sergeant Caleb Bridgewater felt he was nothing before the uniform; striding out through the badlands with his brothers in arms made him the man he is today. It was not just the inescapable violence that got the better of his nerves, but orders given that didn’t align with his own moral compass. Honor became an old feeling, lost amongst the urgent need to avenge fallen friends, desperation in protecting the vulnerable, and realizing that their aspirations were misguided: that they were enforcing an idea of order in a wild land that never asked for it.

Though Sergeant Bridgewater’s performance made him a shining example to others, his postings passed in a haze as he lost himself. He heard what happened to his friends who were discharged, that they were left to struggle with their personal legacies of war. When word reached him of home, and of what had happened in the Bayou, it rattled him back to reality. Letters told of unspeakable horrors and an existential threat to the United States. He urged his men to return to Louisiana, to fight what seemed to be a good fight – a fight he believed it was the nation’s duty to undertake. In the end, he walked alone, still wearing the uniform, believing he had chosen the most important war.

The injustice of war caused Sergeant Caleb Bridgewater to seek a different fight when word from home reached him of what was happening in the Bayou. Forced to desert, he’s proud now to fight the only war he believes in. 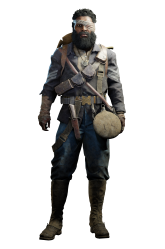 Sgt. Bridgewater was surprised to be assigned a new Caldwell 92 New Army – his regiment often got the bottom of the barrel. But Bridgewater’s performance in the field was unrivalled, and that came with some recognition. 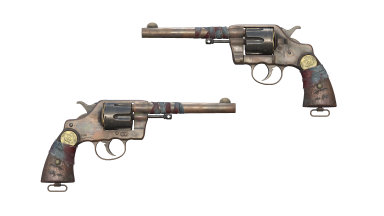 While the Specter 1882 was standard issue, Sgt. Bridgewater set himself apart with an impressively cool head even when the fighting was close and fierce.

This blade is older than Sgt. Bridgewater himself, and it saved his life on more than one occasion. A testament to his own brand of loyalty, he wields it like a furious Machete, carrying unto his own end.